Is the bank of justice empty? 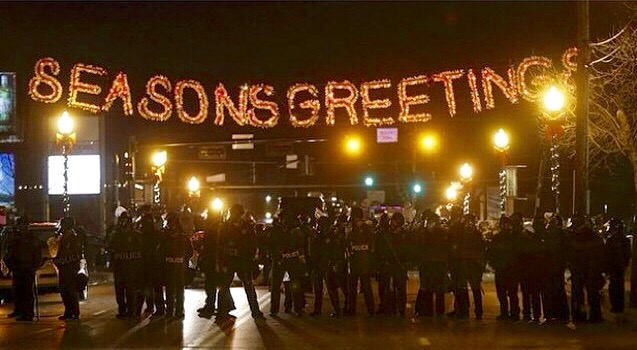 The LORD is a shelter for the oppressed, a refuge in times of trouble. (‭Psalms‬ ‭9‬:‭9‬ NLT)

I went to bed hoping and praying, but woke up this morning to the dreaded headline, “Ferguson in flames…the violence is spreading from coast to coast.”

My hearts aches today…for the Brown family who lost a son; for friends of color or none who are struggling with the decision reached by the grand jury in Ferguson. I watched the press conference last night. Hearing all the words but knowing they were insufficient. I knew there would be no winners. How do you explain to a father and mother whose son is dead that his death is ‘justified.’ It can’t be done, no matter what the evidence may or may not show.

How do you convince people who believe they are marginalized and generationally disadvantaged by the system that should protect and serve them that it really isn’t biased? You can’t—words are never enough and only consistent actions slowly turn things around.

In the lead-up to the event, I reread Dr. Martin Luther King’s I Have a Dream Speech. As I read it I thought, Dr. King’s words are still relevant: a mixture of hope and realism; urging nonviolence while expressing intolerance of the injustices of society toward black men and women; proclaiming hope that one day children of all colors and faiths would see each other as brothers and sisters.

I thought, maybe others would read, remember, and see a world that is progressing even if the race has not yet been won.

But after watching several interviews last night and this morning with black pastors, and reading lots of social media written by smart, intelligent and, from what I could tell, true women and men of God, I knew I still had much to learn and understand and the dream of Dr. King was far from realized.

When asked how he felt, one pastor expressed an intellectual understanding of the ‘facts’ about the decision but he felt betrayed by the system, let down. He still did not feel our society was living into out belief as stated in our Declaration of Independence that “all men are created equal.” He said this is NOT the reality in our country. He did not believe that injustice had been transformed into freedom and justice.

This morning in America the level of distrust of the system is palpable. People I love, respect and trust are having deep emotional negative reactions to this decision and I am conflicted. I want it to be different. I am committed to making it different. I am committed to listening and trying to understand what some are expressing—we in the powerful majority have institutionalized discrimination. Despite the gains we thought we achieved in the Civil Rights Movement we have far to go.

Nothing is worse than a loss of son, the loss of a vision or the loss of a dream. I am praying and holding on to a dream, maybe for those who feel there is no hope, refusing to believe that the bank of justice in America is empty.

1 Response to Is the bank of justice empty?