I grew up on Los Angeles Dodgers baseball.  I was young, but I remember seeing my first game in 1961 with my dad when the Dodgers (the team had moved to L.A. from Brooklyn three season earlier), played their final season at the Los Angeles Coliseum.  We would see a game the next year in a brand new stadium built in Chavez Revenue just outside downtown L.A.

Future Baseball Hall of Famers were on this team: Duke Snyder, Sandy Kofax, Don Dyrsade, and Walter Alston was managing the team. I remember the thrill of sitting in the stands eating the precursor to the Dodger Dog listening to Vin Skully on the radio calling the play-by-play.

By then, the “color barrier” had already been broken in Major League Baseball; a black man, Johnny Roseboro, was catching for the Dodgers. He played his first game for them approximately 10 years to the day after Jackie Robinson started with the Dodgers in April of 1947.

I was playing Little League Baseball at the time–second base–and not bad at it either. We had a catcher who, as my memory now tells me, moved away in the middle of the season and I was asked to go behind the plate. I’d never caught before in my life but there I was, learning a new position and fast! My role model becomes the guy catching for the team I loved–Johnny Roseboro.  In 1961 I was a white kid who thought nothing of wanting to be like a black catcher.

Watching the movie 42 last night with my wife, Dallas, we both got emotional (as did others in the theater–people clapped at the end of the film).  We haven’t yet talked about why; we probably got emotional for different reasons.  But I’m sure, in my case, it was for multiple reasons.  For one, just as we experienced when U.S. voters elected a black man to be the President of the United States and the following morning every black kid in America thought, hey, I could be President of the United States, too, so it was with every black male kid in America in 1947 after Jackie Robinson joined the Dodger–they thought, hey, I could play in the Big Leagues.

But it doesn’t stop there.

One line in the movies just jumped out at me. Branch Rickey who was the General Manager of the Dodgers at the time had a strong conviction (probably both religious/spiritual as well as economic) that it was an injustice for blacks not to be playing in the National Baseball League, and he was determined to break this barrier when he offered the opportunity to Robinson of being the first.

Robinson paid a heavy price for this opportunity and, according to the film, almost quit several times. One one occasion, Rickey says to Robinson, “You know what I saw when I was driving to the park today (Ebbits Field in Brooklyn)?  I saw a kid pretending to be you–a white kid.”

Jackie Robinson was becoming a national hero; to black and white kids alike. 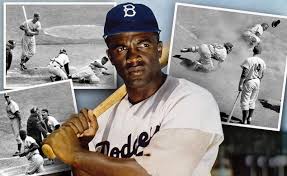 While I didn’t know it in 1961, he’d paved the way for me, too, a white kid playing catcher in Little League baseball to idolize Johnny Roseboro, a black Major League catcher and not think twice about it.