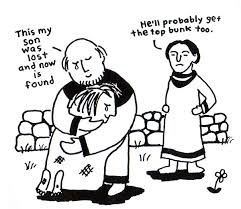 I spoke at a missions festival last weekend using Luke 15 as the basis.  In this passage Luke says that tax collectors and other notorious sinners often came to listen to Jesus teach–he was even eating with them!  A paraphrase says Jesus was treating sinners like “old friends.” Using the story Jesus told of the prodigal or lost son,  I found myself saying to the audience, “God goes to extremes extending grace to people who need it.  Am I extending this kind of grace?” Exhibiting grace–unmerited favor–should be one of the things that sets me a part. People wanted to be around Jesus because he loved them and didn’t condemn them while at the same time pointing people to God who is the author of standards.  As people were pointed to God the Father, Jesus was willing to risk/trust that being in the presence of the God of the universe would ultimately change the way people thought about God and themselves, and then change their behaviors.  Condemnation wasn’t the right approach–at least for ‘despicable’ sinners.   When Jesus was critical, he mostly reserved it for the religious leaders of the day who, according to Luke 15, were complaining because he was associating with sinners. This past week has been one of reflection for me as, once again, the community of Evangelicals I most closely identify with talk about what we’re against rather than what we stand for.  One of my 20-something friends emailed me a link to a blog saying, “This does a pretty decent job of summing up the general feelings of 20 and 30 somethings.” This blog post was written about one of the issues that dominated the news cycle in my Evangelical world.  It took me several days to respond because the whole debate makes me sad. Today I am beyond sad and am renewing my commitment to be winsome in a world that needs it.  This whole debate last week reminds me of a conversation I had with another 20-something friend a few years ago.  Her question was, “I’m trying to find a way to describe myself that doesn’t immediately offend people and drive them away.  Don’t get me wrong, I love Jesus with all my heart but labeling myself a Christian too early in a conversation or relationship isn’t helpful.   What should I do?”  I blogged on that conversation. Re-reading that blog today, I was reminded of a controversial book I once read by James Hunter, To Change the World.  Hunter argues that it’s inherently in our Christian DNA to work to make the world a better place.  He believes our well-meaning efforts often fail to bring about the very change we want to accomplish because  the things we want to change we undermine because we are inherently flawed and therefore incapable of generating the change we want to accomplish.  Hunter says that all too often Christians migrate toward bases of power to accomplish change and unwittingly undermine the very problems they are designed to solve. Why to they fail?  Because Christianity is not a power-based religion.  God accomplished His purposes despite our strengths and mostly through our weakness, “My grace is all you need. My power works best in weakness.” (2 Corinthians 12:9). What is really needed, Hunter argues, is a different paradigm of Christian engagement with the world, one that Hunter calls “faithful presence.”  He defines this an “ideal” of Christian practice that is both individual and institutional; a model that plays out not only in all relationships but in our work and all spheres of social life. I am not promoting Hunter’s book but I like the idea of faithful presence.  That’s what Jesus was–a reminder of who God is, and he is full of love and grace.  Extending this to sinful people made the religious leaders of Jesus’ day angry. In another blog I wrote about labels saying that I, and the community of Evangelicals I most closely identify with, are far too quick to label things.  In this blog I was arguing for a more nuanced approach.  I said, in part because I was anticipating kick-back, that I believe in boundaries both in civil society and in Christianity but what I was suggesting was adopting a worldview that is oriented toward focusing on the core things we agree on rather than the things that divide us.  I said we don’t have to stop talking about the margins but we must not camp there.  It felt last week like we camped on issues that divide rather than unite. I don’t think we can ‘win’ arguments that condemn while trying to attract people to our faith.  We have to be willing to go where they go while at the same time not doing what they do.  Not an easy task.  Jesus got killed for his efforts. I told the group I spoke to last weekend that, when I was younger, I read the story of the prodigal son from the standpoint of the son who said, “Father, I have sinned against both heaven and you, and I am no longer worthy of being called your son.”  But as I’ve grown older, I see this story equally and more powerfully from the standpoint of the father who, when sinned against by his younger son, said to his oldest son, “Look, dear son, you have always stayed by me, and everything I have is yours. We had to celebrate this happy day. For your brother was dead and has come back to life! He was lost, but now he is found!” Did the younger son deserve this reaction from his father?  No, but the father extended grace anyway.  Were there consequences for sin and bad behavior? Yes, but there was also celebration. After a week of reflection I am choosing to look for ways that unite rather than divide.  I’m looking for ways to celebrate rather than mourn.