The Impossible People: Changed by the Word 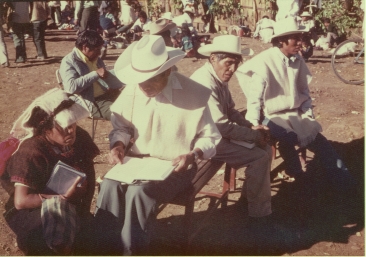 Oblivious to the celebration going on around them, this couple is totally focused on their new Bible….God speaks Chamula!

The Chamula people of southern Mexico earned the nickname “The Impossible People” by their fierce resistance to anything new. To them, change was dangerous.  In fact new ideas that even hinted at change were dangerous — they threatened to provoke the wrath of the vengeful Chamula gods and upset the balance that kept the Chamula culture intact.  It was imperative that all new ideas be vigorously squelched by the shamans and political leaders whose job it was to guard the traditions of the ancestors.In 1957, when Wycliffe translators Ken and Elaine Jacobs began learning the Chamula’s Tzotzil-Mayan language, they longed to tell the people the Good News about Jesus, but they recognized the need for patience.  “If Elaine and I went out knocking on Chamula doors,” Ken said, “we’d quickly feel a razor-sharp machete on our necks or the blast of a muzzle-loaded gun in our backs. If we set up a public address system, [it would not be an effective way to reach them] because in the Chamula culture, new information is never shared in public. It is confided to the most intimate friends, where you know you won’t be killed for it.”

“But,” Ken went on.  “There is a way!”  He and Elaine could hire Chamula people to tend their garden, care for their animals, and help them learn the language. They could begin to translate the Scriptures. If the Word of God ignited a spark of faith in the heart of just one man, and if that man was willing to risk his life to tell another, then that little spark could become a flame of belief. “Eventually,” Ken said, “the flame could become a fire of conviction that would spread throughout the whole tribe.”

And that’s exactly what happened.  A man named Domingo became their gardener, then Ken’s language teacher and co-translator.  Gradually the words Domingo was translating spoke to the skepticism he harbored towards the traditional Chamula belief system.  He trusted in Christ and found the freedom from fear and oppression he yearned for.

The tiny flame of belief began to spread, first to Domingo’s wife, then to his brother-in-law, then to others.  Soon a handful of believers were quietly, cautiously, meeting to study newly translated portions of God’s Word.

The fire spread over natural bridges — from relative to relative, from neighbor to neighbor, from one who’d found hope to another who needed hope. The number of believers grew to 30, then 40, then 100, then 800.  Change brought retribution — beatings, killings, destruction of homes and fields, and finally mass expulsions from the community — but the believers were not deterred. They had found freedom and hope, and they could not make themselves turn back to the old ways. Neither could they stop talking about their loving Lord.

No matter how many times the believers were driven out of the community, they came back, intent on caring for their crops and living their new life in front of their Chamula neighbors.  Then in 1976 came a turning point.  Expelled again, most of the believers gave up their dreams of living in their homeland.  With the support of the Mexican Presbyterian Church, they established a new community on the edge of the nearest Spanish-speaking town, San Cristóbal de Las Casas. They called their new home Nueva Esperanza (New Hope). They found jobs in San Cristóbal or started their own businesses. They built homes, a church, and a school.  Polite and honest workers, they gradually gained the respect of Spanish speakers, and centuries-old racial barriers began to come down.

On January 2, 1980 — 20 years after the Jacobs started translating — the Chamula celebrated the arrival of their completed New Testaments with great joy!  By then 3,000 Chamula lived in Nueva Esperanza. Each year the population grew as more Chamula became believers and were expelled from their homeland. It was not until 1993 that a treaty brokered by outsiders brought about the beginning of the end of the expulsions.

The Chamula Bible (Old and New Testament) was completed in 2001, and today 30,000 Chamula believers base their lives on the truths in that Book. Most of them live around San Cristóbal, but some live in the Chamula homeland. The fire of belief continues to spread, and at least one house church exists in every one of the 124 Chamula villages.

Around San Cristóbal, there are now thirteen thriving Chamula communities.  Chamula people are business owners, taxi drivers, and trusted employees of other businesses.  They basically control the San Cristóbal transportation service and the market.  Their children are gaining educations. They are learning to make their voices heard by voting and even running for office.  Living according to God’s Word has brought them economic, social, educational, and political transformation.

But the Chamula believers have not forgotten that their primary gain is spiritual transformation, and what they’ve found for themselves they are actively sharing with others. They are reaching out to the 150,000 Chamula who have not yet turned their lives over to Jesus. With all their hearts, they want their friends and relatives to know that this is the one change worth risking everything for.

[A fuller account of God’s transforming work in the Chamula community can be found in David Aeilt’s book, “These Words Changed Everything.”]

1 Response to The Impossible People: Changed by the Word