The Good News reached Mr. Lee’s village in Southeast Asia 33 years ago. Mr. Lee, who spoke the Uka language, was intrigued.  He became even more intrigued when he learned that followers of Christ didn’t need to make sacrifices. His own animistic religion demanded frequent sacrifices, and he was tired of the expensive and time-consuming rituals. 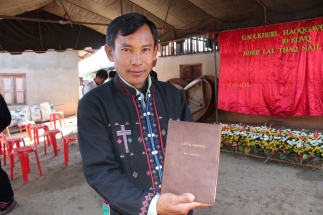 Though he didn’t understand everything he heard, Mr. Lee decided to follow Christ. After a while, a handful of other villagers became believers as well. The new believers began a Sunday school in the village, but they soon ran into a roadblock. There was no Bible in Uka — a language spoken by 15,000 people in four countries — and no one had figured out how to express key biblical terms like “faith” in their language. Without those terms, Mr. Lee and the others were not able to fully explain their faith.

Nevertheless, he wanted his four sons to be educated and grow up to follow Christ. So he sent them to school in a nearby town where they had the opportunity to study the Bible in a related language, Hak.  Through the Hak Scriptures, the sons came to understand the basics of their Christian faith more clearly, and a deep desire grew in their hearts to bring the Good News to all the Uka villages.

But the challenge still remained: there were no Scriptures in Uka. Like their father, they were unable to find Uka words to adequately explain their new faith.  They tried reading the Hak Bible to the villagers, but the villagers didn’t understand it. Hak was, after all, a foreign language to them. That’s when they realized they needed God’s Word in their own language.

After a long search for help, they contacted Wycliffe’s partner, SIL, and Tuula of Wycliffe Finland became their translation advisor. With a very committed translation committee and two mother tongue translators, Naja and Jess, they made good progress.  As they completed portions of Scripture, they distributed the translations in the villages, and people finally began to understand the Word.

The New Testament was dedicated in 2015 in the very same village where it all began, and where Mr. Lee still lives. Most Uka villages now have Christian influence, and the number of believers has grown from a few dozen to over a thousand. Some entire villages are Christian. Many Uka people feel that it is God himself who has approached them from heaven with his Word for them. By speaking their language, he’s demonstrated to them that they have value in his eyes, and they’re responding by following him.