Ann Kapteyn, an SIL translation consultant, was in a bit of a hurry as she reviewed a translation of Galatians in the Mpyemo language. This was her last morning in the Central African Republic before she returned to Michigan. She was trying to go over the entire book with Constantin, one of the translators, and make notes of places that might need improvement. Once she was home, she would write up her comments and suggestions and send them back to the team.

She and Constantin were speeding through verse after verse when he suddenly stopped paying attention.  They’d reached Galatians 4:1-7, where Paul says that believers are no longer slaves, but children of God and his heirs.  Constantin began rereading the passage, totally engrossed in what he was reading.

Then a smile spread across his face. “This is good! This is wonderful! I love this!” he exclaimed!  He looked up at Ann and began to explain the passage to her, commenting on why it was so moving to him.  He pulled out his notebook and wrote down his insights. Then finally he was ready to move on to the next verse.

Ann realized she’d experienced a very precious moment.  She’d witnessed how reading Scripture in a heart language could be a deeply moving experience. Constantin had read that same passage many times in French and Sango (the official languages of his country), but reading it in his mother tongue stopped him in his tracks.  The depth and breadth of the meaning became clear to him as it never had before.

Ann returned home with a prayer in her heart: “May the translated Word of God soon reach the rest of the Mpyemo people, and may their lives be transformed as they explore the truths they find in that Word.” 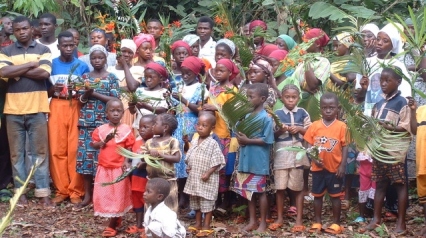