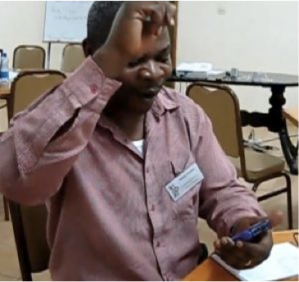 Emmanuel is a taxi driver from Cameroon, West Africa, living in Oklahoma City. His first language is one of Cameroon’s more than 280 minority languages. When he drove Lois Gourley, Wycliffe’s curator for the Digital Bible Library (DBL), to her hotel, Lois told him about her work adding translated Scriptures to the DBL. She also told him about the YouVersion mobile app that allows people to read Scripture on their smartphones. Emmanuel took a deep breath and said, “My heart’s desire is to someday read God’s Word in my language.” Sadly, he didn’t know that he could already listen to an audio recording of Scripture in his language — and watch the story of Jesus — all on his cell phone! Faith Comes By Hearing’s mobile app, Bible.is, has the text and audio, and he can watch the “JESUS” film on YouTube. Someday he’ll be able to order a hard copy from a print-on-demand ministry like Virtual Storehouse.

Kingston is another person who lives outside his home area and didn’t realize he had access to the Bible in his mother tongue. He’s a Nigerian on staff at a Nigerian seminary that works with 500 students from different parts of the country, and speaks English (the official language), Hausa (a major trade language), and the language of his birth — his mother tongue.

When Wycliffe board member Julie Shimer met him, he was already using YouVersion, but he didn’t know it contained multiple versions. He told Julie, “I only have the King James Bible.” Julie showed him how to change versions, and he found the Hausa Bible. Then he started looking for the Bible in his mother tongue. Julie reports that when he found it, he literally started jumping up and down with excitement!

A man who speaks the Miskito language of Nicaragua and Honduras visited Wycliffe’s Discovery Center. He asked Natalie Anderson, the tour guide, if the Bible had been translated into his language. A quick search turned up the information: the Nicaraguan Bible Society has published a translation and it was available on YouVersion. Natalie said, “I gave him all the information and he was very excited! When I told him he could pull it up on his phone and read it, he got the biggest smile on his face and said he could not believe it! To see his face light up was so great!”

The good news is that the pace of Bible translation is accelerating, and with digital technology, an ever-expanding list of translations is available to anyone with a smartphone. Smartphones are proliferating at an amazing rate, so that if a translation exists, it will soon become accessible anywhere on earth that users can make a connection to the Internet.

But far too often people don’t know that these resources are available to them — in the midst of abundance, there is poverty. The pace of translation is accelerating, and more people have more access than ever before in history — praise God! Many, as we know, are still waiting; let’s keep praying that the Scriptures will soon be translated for them. At the same time, let’s pray for Scripture engagement: Pray that people for whom Scriptures have been translated will learn that they can already access these life-giving Words of Christ. Then pray they’ll make the choice to engage!